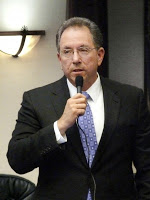 FLORIDA: Show Us Your Papers (Unless You’re Canadian Or European) According to Florida’s proposed Arizona-style immigration law, if cops suspect you of being in the country illegally, they will release you if you show a Canadian or European passport. Passports from other nations? That calls for further investigation.

​Florida state Rep. William Snyder, the slow-drawling ex-Miami-Dade Police officer who has drafted Tallahassee’s version of the hotly debated Arizona immigration bill, is adamant that his law would not lead to racial profiling. “Race, ethnicity, and national origin cannot be used in making arrests. It’s immoral, illegal, and unconstitutional,” he said in a recent radio interview. So why does his bill explicitly offer a free pass to Canadians and Western Europeans, who need only show a passport to be “presumed to be legally in the United States”? “That language makes it clear that police are targeting only a specific minority,” says Susana Barciela, policy director at the Florida Immigrant Advocacy Center. [snip] Even if an officer has “reasonable suspicions” over a person’s immigration status, the bill says, a person will be “presumed to be legally in the United States” if he or she provides “a Canadian passport” or a passport from any “visa waiver country.” What are the visa waiver countries? Other than four Asian nations, all 32 other countries are in Western Europe, from France to Germany to Luxembourg. In other words, Snyder’s bill tells police to drop their “reasonable suspicions” of anyone hailing from dozens of countries full of white people. How is that not racial profiling?