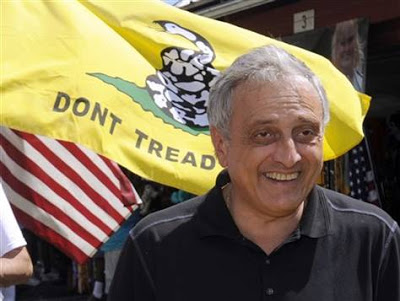 Teabagger lunatic and New York GOP gubernatorial candidate Carl “Imprison The Poor” Paladino today said, “I just think my children and your children would be much better off and much more successful getting married and raising a family, and I don’t want them brainwashed into thinking that homosexuality is an equally valid and successful option–it isn’t. There is nothing to be proud of in being a dysfunctional homosexual. That is not how God created us.”

Paladino was touring Orthodox Jewish neighborhoods in Brooklyn where he made the remark, also saying to at least one group that he would veto a same-sex marriage bill as governor. A spokesman for Attorney General Andrew Cuomo, Paladino’s opponent, immediately fired out this reaction: “Mr. Paladino’s statement displays a stunning homophobia and a glaring disregard for basic equality. These comments along with other views he has espoused make it clear that he is way out of the mainstream and is unfit to represent New York.”

RELATED: Speaking of brainwashing, Carl Paladino has been a fucking hero to the homocons over at Hillbuzz. Wanna bet today’s asshattery doesn’t change their tune a bit?