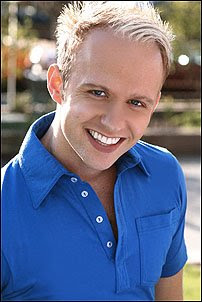 – Openly gay Broadway star Marty Thomas (Wicked, Xanadu) is suing Twitter to force them to disclose the identity of a user who claimed that Thomas was given crabs by a cast member of Avenue Q. Thomas said in court papers: “I do not suffer from, nor have I ever suffered from a sexually transmitted disease.” Twitter has never been forced to identify an anonymous user.

– Openly gay actor T.R. Knight (Grey’s Anatomy) and Patrick Stewart opened last night in the revival of David Mamet’s A Life In The Theatre, which first ran on Broadway in 1977. One early review isn’t so great.

– The Professional Bull Riders Association will hold a competition in the middle of Times Square today at 1pm. The specially-built arena is supposed be “one city block” in size. Free and open to the public. – Four major musicals are opening on Broadway this fall without the usual out-of-town tryouts due to the cost. One result – terrible scenery glitches for Women On The Verge have resulted in show stoppages and apologies from the stage.

– Bette Midler so loves the musical version of Priscilla: Queen Of The Desert that she has become one of its producers. The show made its North American debut in Toronto this week and lands on Broadway in the spring.

– The Real Housewives of New York‘s Countess LuAnn de Lesseps is reportedly talking to casting directors from Chicago and La Cage Aux Folles about joining their shows. Money can’t buy you class, as her “song” goes.

– Tony winner Betty Buckley (Cats) has released a new nine-track album titled Bootleg: Boardmixes from the Road. Buckley, who has been cast as Anna Madrigal in the musical version of Tales Of The City, plays Manhattan’s Town Hall tomorrow night as part of their Broadway Cabaret Festival. Get tickets here.