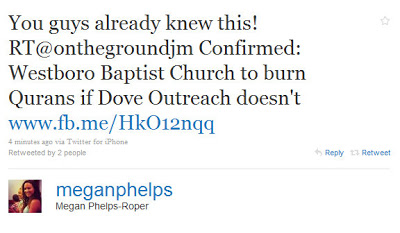 Having already predicted on Twitter that Pastor Terry Jones “would cave under pressure,” the Westboro Baptist Church vows that they’ll conduct a Koran burning of their own. Jones has protested with the Phelps family in years past, but apparently earned their enmity since then. Probably because he got more publicity than they did.