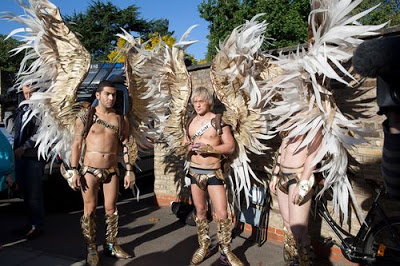 The gay dating site Gaydar stationed the above winged hotties on the Pope’s route today. Via press release:

It’s day two of the Pope Benedict’s state visit to the UK. This morning he visited St. Mary’s University in Twickenham, the same town where gay dating megasite Gaydar.net* is based. On arrival he was met by a large crowd of protestors, including a posse of Gaydar Angels, sent down to underscore the Pontiff’s anti-gay stance. Much to the amusement of the gathered press, his procession took him past Gaydar’s flock of winged muscle boys and not the eagerly waiting nuns at the other end of the street!

Do angels wear codpieces? More photos at the link.