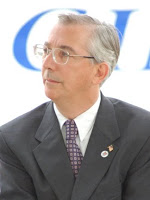 “Last night, I had a dream. It was 2011 and Republicans were celebrating a sweep of the House and near takeover of the Senate. But that dream became a nightmare. A wounded soldier sat in a veteran’s hospital after returning from Afghanistan. Noticeably shaken, his doctor walked in and choked out the worst news of this young soldier’s life: He’d been infected with HIV. You see, the doctor informed him that his wounds came in contact with those of a practicing homosexual, now allowed to serve in our military. ‘How could this happen?’ the soldier expressed shock and disappointment right before I awoke.

“Today I was reminded of several disturbing news stories. Left and right I see conservatives — even some good conservatives — who no longer seem to care. And that’s when it hit me. In my nightmare, conservative Americans had been too busy focusing on jobs and the economy before the November elections. Distracted, they failed to maintain a committed resistance to the Homosexual Agenda.” – Public Advocate head Eugene Delguadio, from a fundraising plea titled “Don’t Ask, Don’t Tell” Stalled In Senate By Public Advocate.

Send him money! He single-handedly stopped the repeal of DADT!