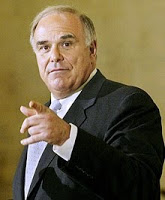 Saying he is “appalled” at the revelation, Pennsylvania Gov. Ed Rendell has ordered his state’s Homeland Security agency to stop spying on LGBT groups and other activism movements.

Information about an anti-BP candlelight vigil, a gay and lesbian festival and other peaceful gatherings became the subject of anti-terrorism bulletins being distributed by Pennsylvania’s homeland security office, an apologetic Gov. Ed Rendell admitted. Rendell, who claimed he’d just learned about the practice, said Tuesday that the information was useless to law enforcement agencies and that distributing it was tantamount to trampling on constitutional rights. [snip] “I am deeply embarrassed and I apologize to any of the groups who had this information disseminated on their right to peacefully protest,” Rendell said at an evening Capitol news conference.

The spying was committed courtesy of a $125,000 state contract with an Israeli intelligence firm called the Institute of Terrorism Research and Response. According to the ITRR’s website:

All of the information ITRR’s staff creates is sent to its monitoring center in Jerusalem, where it is analyzed and verified with other local sources. “We never have just one member of the ground truth network in a country,” Perelman said. Right now, the institute has more than 15 people in the field. “We are constantly cross checking with ground truth sources and communications that we receive through other means.” ITRR’s network is global but not all countries are currently monitored. “If a client feels the need for coverage in a particular area we will obtain the information and coverage,” Perelman said.

More on this as it develops…