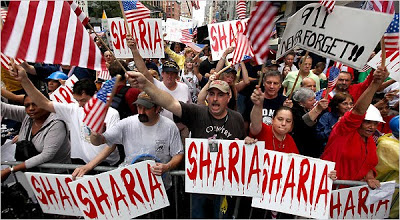 Atlas Shrugged blogger Pamela Geller, also the founder of Stop The Islamization Of America, will be staging a massive rally tomorrow at Ground Zero. And the NYPD is gearing up for an ugly situation.

“We want to keep everyone in their corners. You don’t want the opposing sides to clash,” an NYPD official told The Post. “All eyes are going to be on New York City that day. No one wants to see a fight on Sept. 11.” With as many as 4,000 riled-up demonstrators expected to pack into two blocks of Park Place between West Broadway and Broadway — the site of the proposed mosque — the department is sparing no expense to keep the peace, the official said. “There’ll be an army of cops down there,” the official said, estimating the number of officers at several hundred. The dueling rallies — to be held tomorrow, on the ninth anniversary of the terror attacks — will pit mosque supporters against those who believe that the site shouldn’t be so close to Ground Zero. The demonstrators will square off on opposite sides of Park Place, the site of the controversial Park51 center, after 9/11 commemorations conclude at noon in nearby Zuccotti Park, off Liberty Street. But no matter where they stand on the mosque issue, some people questioned the appropriateness of protesting on Sept. 11. “My own view — irrespective how you feel about the mosque — I don’t think you have it that day. It’s totally disrespectful,” said Tom Acquaviva, 70, of Wayne, NJ, who lost his son, Paul, 29, an employee of Cantor Fitzgerald, in the attack.

Geller has asked her supporters to bring American flags rather than the signs such as the ones in the photo above.