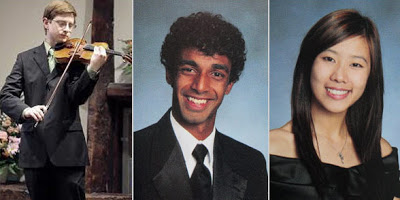 “Jumping Off The GW Bridge. Sorry.” The New York Times reports more details about the suicide of 18 year-old Rutgers freshman Tyler Clementi, who jumped off the George Washington Bridge after his roommate streamed live video of Clementi having sex with a man. Clementi’s final Facebook update: “Jumping off the gw bridge. sorry.”

It started with a Twitter message on Sept. 19: “Roommate asked for the room till midnight. I went into molly’s room and turned on my webcam. I saw him making out with a dude. Yay.” That night, the authorities say, the Rutgers University student who sent the message used a camera in his dormitory room to stream the roommate’s intimate encounter live on the Internet. [snip] The Middlesex County prosecutor’s office said Mr. Clementi’s roommate, Dharun Ravi, 18, of Plainsboro, N.J., and another classmate, Molly Wei, 18, of Princeton Junction, N.J., had each been charged with two counts of invasion of privacy for using “the camera to view and transmit a live image” of Mr. Clementi.

The most serious charges carry a maximum sentence of five years. Mr. Ravi was charged with two additional counts of invasion of privacy for trying a similar live feed on the Internet on Sept. 21, the day before the suicide. A spokesman for the prosecutor’s office, James O’Neill, said the investigation was continuing, but he declined to “speculate on additional charges.” Steven Goldstein, chairman of the gay rights group Garden State Equality, said Wednesday that he considered the death a hate crime. “We are sickened that anyone in our society, such as the students allegedly responsible for making the surreptitious video, might consider destroying others’ lives as a sport,” he said in a statement.

Ravi is claiming that the first broadcast of Clementi was an accident, but police say he attempted a second live-stream two days later. Last night police recovered the body of a red-headed young man from the banks of the Hudson River. The family will make the identification today.