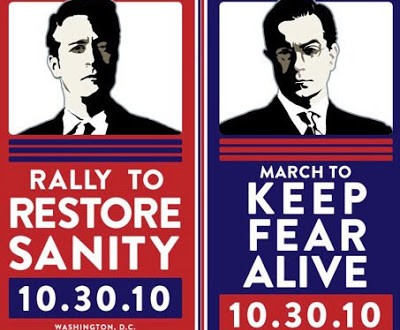 Vanity Fair has the deets:

On last night’s Daily Show and Colbert Report hosts Jon Stewart and Stephen Colbert, respectively, announced that they would be holding concurrent rallies on the Mall, in Washington, D.C., on October 30. Stewart’s event, the Rally to Restore Sanity, will urge citizens to “take it down a notch for America.” This means, according to the host, attendees are assembling to encourage others to ”stop shouting, throwing and drawing Hitler mustaches on people other than Hitler.” Colbert’s convention, “Keep Fear Alive,” aspires to achieve precisely the opposite. According to PopEater, in a press release about the event, Comedy Central gave its word that the rivaling rallies would “bigger than Nixon/Kennedy, Ali/Foreman, Aniston/Jolie, 50/Nas, Joe/the Volcano, Alien/Predator, Bunny/Fudd and Ecks/Sever combined.” Another question, though, is whether the pow-wow will garner the same turn-out and press coverage as Glenn Beck and Sarah Palin’s Restoring Honor, a summertime Tea Party variety show, which drew crowd of anywhere from 100,00 to a million, depending on who‘s lying to you.

Who’s down? I’m thinking about attending and have already gotten emails from friends in Chicago and San Francisco who are flying in.