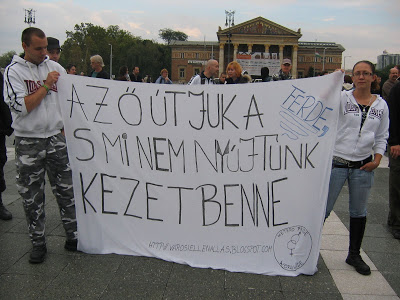 Calling it a “heterosexual pride parade,” about 100 skinheads and their supporters marched through Budapest this weekend to highlight their demand that the local government deny homosexuals the right to use the city’s public spaces.

The participants addressed a petition to two MPs of the radical nationalist Jobbik party, Dora Duro and Elod Novak, who attended the march, which asks for a modification of Hungary’s law of assembly to prevent such [gay] gatherings. The MPs assured the marchers of their support. This year the Gay Pride Parade was held on July 10 along Budapest’s Andrassy Boulevard on a shortened route compared to earlier years and amid heavy police protection. The event, organised each year since 1997, has been disrupted by violent anti-gay radicals in each of the past three years.

More photos and videos are here.