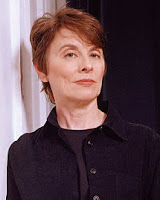 “Despite showing acres of pallid flesh in the fetish-bondage garb of urban prostitution, Gaga isn’t sexy at all – she’s like a gangly marionette or plasticised android. How could a figure so calculated and artificial, so clinical and strangely antiseptic, so stripped of genuine eroticism have become the icon of her generation? Can it be that Gaga represents the exhausted end of the sexual revolution? In Gaga’s manic miming of persona after persona, over-conceptualised and claustrophobic, we may have reached the limit of an era.

“Gaga has borrowed so heavily from Madonna (as in her latest video-Alejandro) that it must be asked, at what point does homage become theft? However, the main point is that the young Madonna was on fire. She was indeed the imperious Marlene Dietrich’s true heir. For Gaga, sex is mainly decor and surface; she’s like a laminated piece of ersatz rococo furniture. Alarmingly, Generation Gaga can’t tell the difference. Is it the death of sex? Perhaps the symbolic status that sex had for a century has gone kaput; that blazing trajectory is over.” – Camille Paglia, writing for the Sunday Times Magazine.