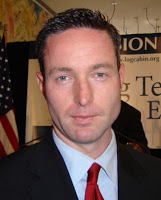 “Despite our name, GOProud is not a partisan organization; we do not hold ourselves out as an auxiliary of the Republican Party. We are not an organization seeking to ‘change’ the Republican Party into the party of Dede Scozzafava or Chris Shays. We are conservatives, committed to the conservative movement. We believe strongly that what matters are principles not partisanship.

“Our agenda is unlike the agenda of any other gay organization. Instead of fighting to expand the federal government through hate crimes laws or federal employment non-discrimination legislation, legislation that only impacts a sliver of gay people, we instead focus on issues like taxes, healthcare, retirement security, and the economy — we offer gay Americans pragmatic, common-sense conservative approaches to these issues that will improve their lives, as well as the lives of all Americans.

“We believe strongly that the federal government doesn’t have all the answers to the challenges facing gay and lesbian families. Indeed, we believe that often the federal government is the problem — not the solution.” – GOProud head Christopher Barron, restating his group’s opposition to LGBT rights in an essay for the right-wing Daily Caller.