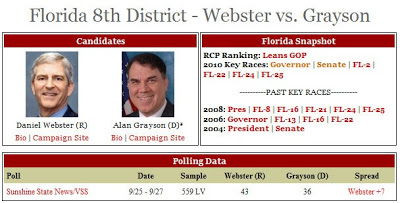 Things aren’t looking so great for one of our favorite House members, Rep. Alan Grayson (D-FL). Talking Points Memo on the just-released poll:

A new Susquehanna (R)/Sunshine State News poll of Florida’s 8th District shows fiery liberal Democratic Congressman Alan Grayson trailing his Republican opponent, former state Sen. Dan Webster. The numbers: Webster 43%, Grayson 36%, plus 6% for Tea Party candidate Peg Dunmire and independent George Metcalfe. The survey of likely voters has a ±4.14% margin of error. There is no previous poll of this race by this firm for direct comparison. The pollster’s analysis finds that Grayson’s unfavorable rating is at 51%: “He’s even more unpopular than the president, which is not surprising given how controversial he has been with his rhetoric, overall style and TV ads.”

Grayson was criticized last week for an ad attacking Webster which CNN and other outlets said had been edited to twist Webster’s words. Grayson appeared on CNN to defend the ad.