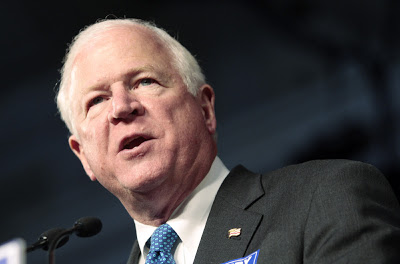 I’ve just gotten off the phone with Atlanta Journal-Constitution political writer Jim Galloway who says that Sen. Saxby Chambliss has confirmed that the “All faggots must die” comment left here on JMG earlier today did indeed come from his Atlanta office. Galloway reports that Chambliss told him his office is conducting an internal investigation. For now Chambliss’ spokesperson has issued a preliminary statement:

“We have seen the allegations and are moving quickly to understand the facts. This office has not and will not tolerate any activity of the sort alleged,” Chambliss spokeswoman Bronwyn Lance Chester said. “Once we have ascertained whether these claims are true, we will take the appropriate steps.” The comment was posted on Joe.My.God., a blog dedicated to gay and lesbian issues. “All [gays] must die,” wrote a commenter identifying himself as “Jimmy.” Blog author Joseph Jervis of New York City used the Internet Protocol address attached to the comment to trace the slur to “the neighborhood” of Chambliss’ office in Atlanta. Readers quickly helped. “Among the fields in which gay people are over-represented is the IT field,” Jervis said. The office of U.S. Sen. Johnny Isakson is in the same area. But a spokeswoman for Isakson said his staff quickly ascertained that the message did not originate with them.

Galloway tells me a further confirmation, and hopefully, the identity of the commenter, should come tomorrow. I’ve also talked to producers at CNN and two Fox affiliates who may be covering the story. Thanks, as always, to our worthy JMG geeks for all their help!

UPDATE: CNN will be covering the story during Rick Sanchez’ show, which begins at 8pm EST.

UPDATE II: The AJC’s Galloway cautions that Chambliss is not taking responsibility yet.

UPDATE III: It looks like CNN booted the story for anti-gay preacher busted for sex with teenage boys.

Previous Dedicated To The U.S. Senate
Next Sen. Al Franken On DADT Fail