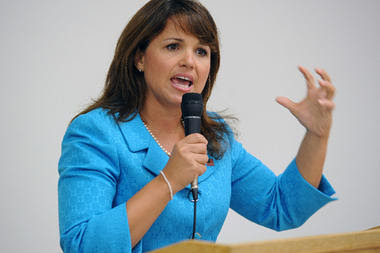 Wade Richards, a former member of Christine O’Donnell’s “ex-gay” group who has since come to terms with his sexuality, tells all in a report published today by the Daily Beast. According to Richards, O’Donnell has a lesbian sister, whom he credits with helping him accept himself. The article lists some of O’Donnell’s track record in her long campaign to demonize LGBT people.

Toward the end of the Clinton administration, she protested the appointment of James Hormel to be ambassador to Luxembourg, a posting the religious right opposed because Hormel was gay. “The SALT was concerned about Hormel’s ties to the pedophile-rights movement,” her website said, though there was not a shred of evidence behind the slur. In 1997, in a clip recently unearthed by Talking Points Memo, she appeared on C-SPAN, where, looking fresh, lovely, and innocent, she objected to AIDS sufferers being called “victims” because the disease is the product of their own actions. In an appearance on Fox in 2000, she exclaimed over the horrors of New York’s gay pride parade: “They’re getting away with nudity! They’re getting away with lasciviousness! They’re getting away with perversion!”

Richards was unnerved when he went into Americans for Truth About Homosexuality’s “media room” and found copious hard-core porn—for research, naturally—as well as leather bondage gear for undercover work. “The sad thing was, there’s that 80-year-old grandma in Wichita, Kansas, thinking she’s donating this money to a good cause, and it’s going to who knows what kind of ‘research,’” says Richards. “As someone struggling with same-sex attraction, I thought, this is really not a place I need to be hanging out in.”

Richards eventually became an ex-ex-gay after reaching out to Wayne Besen at Truth Wins Out. Read the entire story at the Daily Beast.