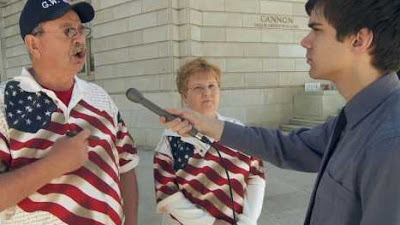 Chase Whiteside Is One Of Us Many of you have expressed admiration for NewLeftMedia interviewer Chase Whiteside, whose impassive apparent approval has allowed so many teabaggers to hang themselves in his videos. You knew somebody that smart had to be gay, right? Here’s Whiteside’s blog, where he’s rather frank about his life. He’s single, not looking, hates nipple play, is cut but considers circumcision to be a crime, and likes guys who start with S: “Smart, shy, short, swarthy, smiling, sincere, spry, sweet.”

(Via Dominic Holden at Slog)

Previous Like September In Tuscany
Next The Iraq War May Be Over, But Don’t Forget The Lies That Got Us There