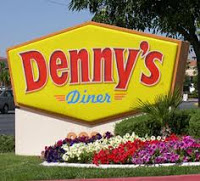 CALIFORNIA: Denny’s Waiter Stabbed For Being Gay, Cops Rule It A Hate Crime A waiter at a Denny’s restaurant in Santa Maria, California is hospitalized with neck and throat wounds after being attacked by a customer who first demanded to know, “Are you gay?” When the waiter replied that he was, the customer stabbed him with a knife. The 24 year-old assailant fled the scene but was later apprehended and charged with attempted murder as a hate crime. The waiter is expected to survive.