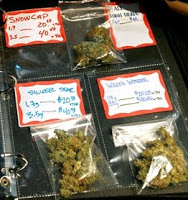 A coalition of beer distributors is opposing California’s Proposition 19, the attempt to legalize and tax the sale of marijuana.

On Sept. 7, the California Beer & Beverage Distributors gave $10,000 to a committee opposing Proposition 19, the measure that would change state law to legalize pot and allow it to be taxed and regulated. The California Police Chiefs Association has given the most to the Proposition 19 opposition with a contribution of $30,000, according to Cal-Access, a website operated by the secretary of state’s office. Rhonda Stevenson, the California Beer & Beverage Distributors political action committee’s coordinator, was out of the office on Wednesday. Nobody else from the group was available to comment. “Unless the beer distributors in California have suddenly developed a philosophical opposition to the use of intoxicating substances, the motivation behind this contribution is clear,” Steve Fox, director of government relations for the Marijuana Policy Project, said in statement. “Plain and simple, the alcohol industry is trying to kill the competition. Their mission is to drive people to drink.”

Some beer manufacturers have disavowed their own distributors. Sierra Nevada has demanded that their name be removed from the membership list of the above-cited group.