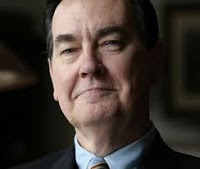 Cal Thomas: We Must Purge The Evil Muslims From America “We are doing a poor job of fighting the terrorists at home if we continue to allow Muslim immigrants, especially from Pakistan, Somalia and Yemen, into America. We won’t win this war if we permit the uncontrolled construction of mosques, as well as Islamic schools, some of which already have sown the seeds from which future terrorists will be cultivated. We won’t win this war if we continue to permit the large-scale conversion to Islam of prison inmates, many of whom become radicalized and upon release enlist in al-Qaida’s army. We must purge the evil from among us, or else. ” – Wingnut columnist Cal Thomas, writing for Townhall. Thomas is the former vice president of the Moral Majority.