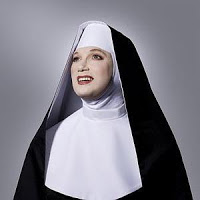 – Legendary playwright and Tony nominee Charles Busch (left) has opened Off Broadway with his latest, The Divine Sister, in which he plays Mother Superior of St. Veronica’s, where “dark secrets are rampant.” Early reviews are boffo.

– Nicole Kidman returns to Broadway next fall in a revival of Tennessee Williams’ Sweet Bird Of Youth. The original 1959 production starred Geraldine Page and Paul Newman.

– Jodie Foster, Kate Winslett, and 2010 Oscar winner Christopher Waltz (Inglorious Basterds) will star in Roman Polanski’s movie adaptation of the Tony winning drama Gods Of Carnage. Although the play is set in Brooklyn, filming will take place in France because, well, you know.

– The cast recording of the revival of Jerry Herman and Harvey Fierstein’s La Cage Aux Folles has been released. Kelsey Grammer’s vocals are reviewed as “rough.” Playwright and gender-bending actor David Greenspan stars as Queen Elizabeth in the Off Broadway revival of Virginia Woolf’s Orlando, now running at the Classic Stage Company.

– Jerry Seinfeld will make his Broadway debut as the director of former SNL cast member Colin Quinn’s one-man show, which begins an 11-week run at the Helen Hayes on October 22nd.

– The musical version of Steven Spielberg’s hit movie Catch Me If You Can is scheduled to land on Broadway in the spring. The show had a well-received tryout in Seattle last year.

VIDEO: Broadway star Nathan Lane teases the ladies of The View about how their guests greet them. Previous DOJ To Judge: Keep Enforcing DADT
Next 4Chan Hack Of The Year