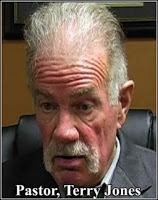 Pastor Terry Jones of Gainesville, Florida’s Dove Outreach Ministry agreed late this afternoon to cancel his planned burning of Korans on September 11th. Additionally, Jones will fly to NYC this weekend and speak with the imam backing the Cordoba House about finding another location for the so-called “Ground Zero mosque.” The agreement was announced by an imam from the Central Florida Islamic Association, who said that Jones did not wish to answer questions about his change of heart.

So. No burning Korans AND possibly no “Ground Zero mosque.” Who brought this about? The CIA? The military? Obama himself denounced Jones on national TV early this morning. It will be fascinating the learn the back-channel powers that brokered this deal.

UPDATE: Donald Trump has offered to buy the planned site of Cordoba House in return for an agreement that any new downtown mosque would be at least five blocks further from Ground Zero than the planned location. The owner of the site is said to be open to Trump’s offer.

UPDATE II: Let make it clear that an actual agreement between all parties regarding Cordoba House has not been reached.