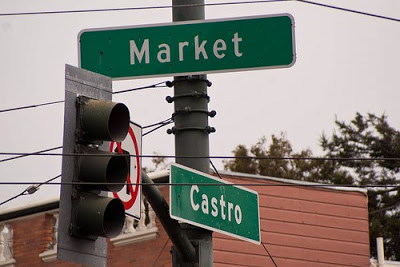 BREAKING: GetEQUAL To Close Down Castro & Market In ENDA Protest GetEQUAL plans to close down the intersection of Castro and Market streets in San Francisco this afternoon in a protest over House Speaker Nancy Pelosi’s inaction on ENDA. The group similarly shut down the Las Vegas strip in August during Netroots Nation. Today’s action is scheduled for 5pm local time. Via press release:

“We pay taxes, contribute to the economy, and create American-paid jobs that provide products and services world-wide. Yet we continue to be treated unequal and Speaker Pelosi has the power to bring us one step closer to being fully-protected American citizens – and workers,” said Dan Fotou, a California GetEQUAL supporter and participant in today’s rally. “As Speaker Pelosi and other members of Congress are out campaigning to keep their jobs, they should know we have every intent of continuing our campaign to keep our jobs, too. Speaker Pelosi has said that ‘our impatience is justified’ – but what isn’t justified is the unfulfilled promises she continues to make to the LGBT community. It’s time for Speaker Pelosi to do the right thing and schedule an immediate vote on ENDA.”

“GetEQUAL has promised that, as long as people’s lives and livelihoods are at stake, we will not stop standing up for those LGBT workers in dozens of states across this country without a voice, without any job security,” said Heather Cronk, managing director of GetEQUAL. “With the launch of our ‘ENDA Summer’ campaign, we told politicians that while they are back home campaigning to save their jobs, we intend on reminding them that their employment isn’t the only one on the line. Millions of LGBT workers punch a clock every single day unsure if today’s timecard could turn into tomorrow’s discriminatory pink slip. The time to pass ENDA is now.”

Another protest is underway at this writing in the offices of Rep. Chris Carney (D) in Pennsylvania. Zach Ford has more and photos of the sit-in.