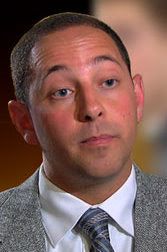 A reader writes to note that Michigan Assistant Attorney General Andrew Shirvell has been on an anti-gay campaign for years. From a 2005 news story:

Members of a local student-oriented Catholic parish received an e-mail last week urging them to boycott the New York Pizza Depot on East William Street because of a gay pride rainbow sicker on its front door. The sticker has upset some people, including Andrew Shirvell, an NYPD customer and member of St. Mary’s Student Parish, located down the street from NYPD. Shirvell, a University alumnus and former president of Students for Life, said the sticker is offensive because it endorses homosexuality instead of simply tolerating it. “I find the rainbow flag offensive because it is a symbol of the homosexual movement that, in my opinion, indicates a validation of the homosexual lifestyle, as opposed to a sign that indicates ‘openness’ to customers who are of the homosexual orientation,” he said.

Shirvell said the pizzeria “had to put up the rainbow flag decal in order to appease the homosexuals who frequented NYPD on Friday nights.” No homosexual pizza! No homosexual cupcakes!