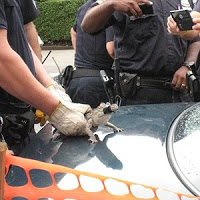 At least one alligator really does live in New York City’s sewers. Cops apprehended an 18-inch gator that crawled out of an overflowing Astoria storm drain and hunkered down beneath a parked car this afternoon, delighting onlookers and giving fresh meat to the urban myth that the carnivorous critters are living below the Big Apple. The scaly spectacle began just after 3 p.m., when a passersby spotted the reptile on Newtown Avenue near 29th Street and yelled “Crocodile!” “That’s the craziest thing I’ve ever seen,” marvelled Elizabeth Ferguson, 25, who has lived on the block for three years. “He was really small, but mean looking.”

RELATED: Gothamist recaps the start of the legend in this 2009 post.