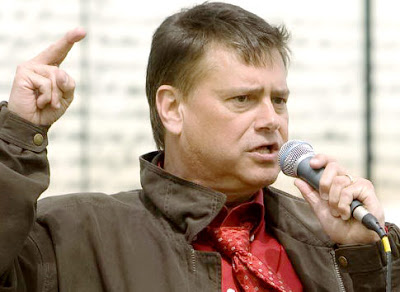 In a new low for a movement littered with new lows, Tea Party Express founder Mark Williams has labeled Michael Bloomberg and Manhattan borough president Scott Stringer as “Judenrats” for their support of Cordoba House. From Williams’ blog:

How many times do I have to tell you…. the Ground Zero Mosque is a chest-beating pile of puke from the bellies of a savage, death cult culture, a throwback to the 7th century. Politically correct Judenrats like New York Mayor Michael Boomberg and Scott Stringer (Manhattan Borough President) and domestic enemies who are supporting the mosque – with open ties to Islamic Terrorist organizations and supporting states are doing nothing more than erecting a giant middle finger to be trust at the victims of 911… which includes all of civilized Mankind.

Wikipedia: “Judenräte (singular Judenrat; German for “Jewish council”) were administrative bodies during the Second World War that the Germans required Jews to form in the German occupied territory of Poland, and later in the occupied territories of the Soviet Union.”