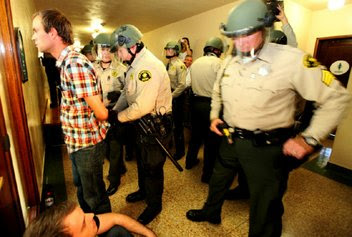 A dozen activists were arrested today at a San Diego county clerk’s office when they refused to leave without being issued marriage licenses.

On the day hundreds of gay and lesbian couples statewide planned to obtain their long-awaited marriage licenses, a crowd of about 50 people gathered at the county clerk’s office Thursday to protest a federal judge’s stay of a federal ruling that Proposition 8 is unconstitutional. Three people were taken away in plastic handcuffs by sheriff’s deputies early in the demonstration and an additional nine people were removed later. A deputy said they were detained for blocking access to a county office. Tony and Tyler Dylan-Hyde and at least one other couple came to the county clerk’s office this morning at 8 a.m. asking to receive their marriage license. “We believe that county officials and the Attorney General have the authority and the obligation to allow marriage licenses to proceed based on both federal court findings and that Prop. 8 is unconstitutional and the governor’s filings in Prop. 8 cases,” Tyler Dylan-Hyde said. “We are asking you to do what’s right.”

According to the linked news story, those arrested had blocked the entrance of heterosexual couples with appointments to get licenses.