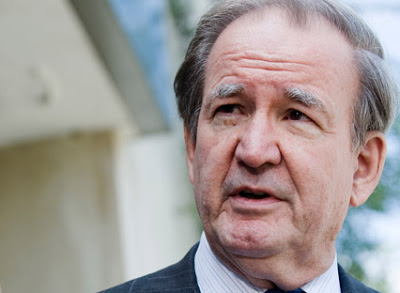 Pat Buchanan: Gay Marriage Is Like Incest, Polygamy And Prostitution “Federal Judge Vaughn Walker is truly a visionary. Peering at the 14th Amendment, Walker found something there the authors of the amendment never knew they put there, and even the Warren Court never found there: The states of the Union must recognize same-sex marriages as equal to traditional marriage. With his discovery, Walker declared Proposition 8, by which 5.5 million Californians voted to prohibit state recognition of gay marriage, null and void. What the people of California voted for is irrelevant, said Walker; you cannot vote to take away constitutional rights. This is not just judicial activism. This is judicial tyranny.

“Walker says the only motivations behind Proposition 8 had been “biases” and “moral disapproval,” and “moral disapproval … has never been a rational basis for legislation.” But what else is the basis for laws against polygamy and incest? What else was the basis for the Mann Act, which prevented a man from taking his girlfriend across the state line to a motel? What is the basis for prohibiting prostitution, a free exchange of money for sexual favors, if not “moral disapproval”? What the judge is saying with this opinion is that the majority cannot define morality, and, even if it does, it cannot impose it. We are defenseless against what we believe to be moral decadence.” – Pat Buchanan, writing for Townhall.