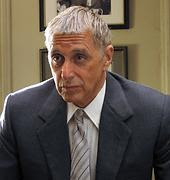 “Now to someone who does not understand this, homosexual is what I am because I have sex with men. But really this is wrong. Homosexuals are not men who sleep with other men. Homosexuals are men who in fifteen years of trying cannot get a pissant antidiscrimination bill through the City Council. Homosexuals are men who know nobody and who nobody knows. Who have zero clout. Does this sound like me, Henry? No. I have clout. A lot. I can pick up this phone, punch fifteen numbers, and you know who will be on the other end in under five minutes, Henry?

“Even better, Henry. His wife. I don’t want you to be impressed. I want you to understand. This is not sophistry. And this is not hypocrisy. This is reality. I have sex with men. But unlike nearly every other man of whom this is true, I bring the guy I’m screwing to the White House and President Reagan smiles at us and shakes his hand. Because what I am defines entirely who I am. Roy Cohn is not a homosexual. Roy Cohn is a heterosexual man, Henry, who fucks around with boys.” – Al Pacino as Roy Cohn in Tony Kushner’s Angels In America.