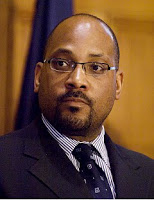 New York Senate leader John Sampson met with the Stonewall Democratic Club in Brooklyn this weekend where activists ripped him a new one over his support for Sen. Ruben Diaz and Sen. Shirley Huntley, both of whom vigorously oppose marriage equality. Things got so heated at the meeting that Sampson threatened to walk out.

Sampson has angered gay advocates with his pledge to support all Senate Dems seeking reelection, including the six who voted against the same-sex marriage bill, killing it, 38 to 24. He’s also refused to promise to put the controversial bill up for another vote. “I don’t think the senator is a homophobe by any stretch of the imagination, but we’d like to see him working on our side a little bit harder,” club President Joe Hagelmann said about Saturday’s meeting at Junior’s Cheesecake. Eight Democrats joined all 30 Republicans in opposing the bill. One opponent, Hiram Monserrate, has since been expelled from the Senate. Another no-vote, Sen. George Onorato, is retiring. Five of the remaining six face serious primary or general election challenges.

Catch that last line? The Democratic leader of the New York Senate is headlining a fucking fundraiser for Sen. Ruben Diaz, who says that he is the church AND the state for New York. Click over to the Advocate for Julie Bolcer’s detailed report from the meeting.

Previous Where Do Things Stand On Prop 8?
Next Pop-Tarts In Times Square