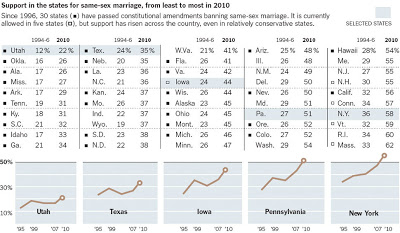 Even though thirty states have banned same-sex marriage by public referendum, support on the issue has been rising in all states. Support is lowest in Utah, Oklahoma, Mississippi and Alabama. Support is highest in the states where it is legal (and New York, California, and most perhaps most notably, Rhode Island.) Embiggen the chart or go here for more.