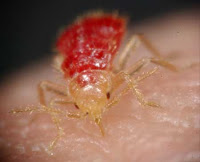 A Little Good News About Bedbugs The New York Times reports that while the city remains at DefCon 1 over the bedbug panic, at least we can rest assured that the blood suckers don’t carry any diseases.

Bats are sources of rabies, Ebola, SARS and Nipah virus. And other biting bugs are disease carriers — mosquitoes for malaria and West Nile, ticks for Lyme and babesiosis, lice for typhus, fleas for plague, tsetse flies for sleeping sickness, kissing bugs for Chagas. Even nonbiting bugs like houseflies and cockroaches transmit disease by carrying bacteria on their feet or in their feces or vomit. But bedbugs, despite the ick factor, are clean. Actually it is safer to say that no one has proved they aren’t, said Jerome Goddard, a Mississippi State entomologist. But not for lack of trying. South African researchers have fed them blood with the AIDS virus, but the virus died. They have shown that bugs can retain hepatitis B virus for weeks, but when they bite chimpanzees, the infection does not take.

Check out the NYC Bedbug Registry for the addresses of apartment and office buildings currently reported to be infested.