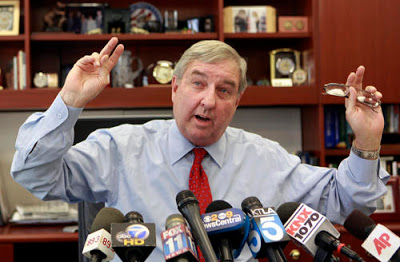 GOP Candidate For CA Attorney General:
I Will Defend Prop 8 In Court Los Angeles District Attorney Steve Cooley says that if he is elected as state Attorney General in November, he will defend Proposition 8 in court. Current AG Jerry Brown had declined to do so.

“The role of the attorney general is to defend the will of the people,” says [Cooley spokesman Kevin] Spillane. “He would defend (Prop. 8) and appeal” U.S. District Court Judge Vaughn Walker’s ruling that found the anti-gay marriage ballot measure to be unconstitutional. Spillane says Cooley considers his position on Proposition 8 to be a matter of “general policy” if he became the next attorney general, not an issue of whether or not he opposes same-sex marriage. Two weeks ago, Walker found Proposition 8, the 2008 ballot measure that banned gay marriage in California, to be unconstitutional. The ruling has been appealed by proponents of Prop. 8, with the U.S. Ninth Circuit Court of Appeals taking the case. Legal experts are not certain what role, if any, the next attorney general or governor in California will play in the appeal, but there is a possibility those offices could get involved. California Attorney General Jerry Brown and Governor Arnold Schwarzenegger have both refused to defend Prop. 8 in court. Cooley did not endorse or oppose the ballot measure in 2008, Spillane says.