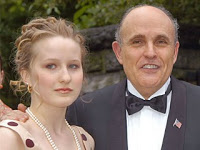 Rudy Giuliani’s 20 year-old daughter Caroline was busted on NYC’s Upper East Side yesterday when she tried to shoplift cosmetics from a Sephora.

She was allegedly caught by a store security camera shoplifting five cosmetics items worth more than $100 — including Aqua Cream, Dior Skinflash Primer, Bliss hydroderm cream, a rollerball funnel and a hairnet — and escorted out of the store in handcuffs, according to police sources. Giuliani is currently being held by police. Charges have yet to be filed, but police sources told ABC News that she is expected to be charged with petit larceny and released. She will be required to appear before a judge at a later date, sources said.

Caroline lives in an UES townhouse with her mother Donna Hanover, who divorced “sanctity of marriage” Rudy in 2002 shortly after she caught him fucking the shit out of his secretary in the basement of City Hall.