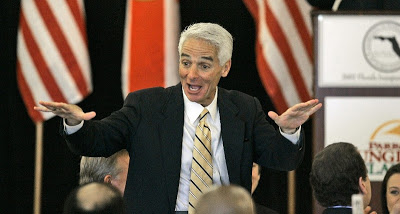 “When it comes to marriage, I think it is a sacred institution, I believe it is between a man and a woman,” Crist said, “but partners living together, you know, I don’t have a problem with it.” “It’s just how I feel,” Crist added. Anti-gay activists have repeatedly pushed Congress to consider a Federal Marriage Amendment, but it has never gathered enough support to pass. The amendment was a central issue in the 2004 presidential election.

Of course, Dubya’s mouthpiece on the Federal Marriage Amendment was Quisling Ken Mehlman. Sometime around 2016 we’ll see Closet Case Charlie come out a la Mehlman, telling us that he was secretly working from the inside to keep the anti-gay GOP at bay.

“In an interview that aired today, I was not discussing an amendment to the U.S. Constitution banning same-sex marriage, which I do not support, but rather reaffirming my position regarding Florida’s constitutional ban that I articulated while running for Governor. In fact, the interviewer’s question reflected just that. I am fully supportive of civil unions and will continue to be as a United States Senator, but believe marriage is a sacred institution between a man and a woman.”