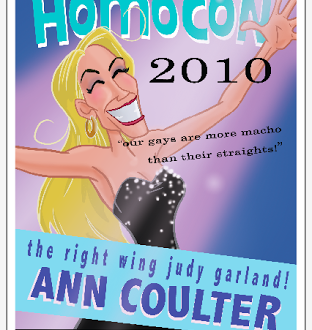 Ann Coulter To Appear At National Convention Of Self-Loathing Homosexuals GOProud, the only national organization representing gay conservatives and their allies, announced that conservative author Ann Coulter is headlining their first annual Homocon – a party to celebrate gay conservatives. “The gay left has done their best to take all the fun out of politics, with their endless list of boycotts and protests. Homocon is going to be our annual effort to counter the ‘no fun police’ on the left,” said Christopher Barron, Chairman of the Board of GOProud. “I can’t think of any conservative more fun to headline our inaugural party then the self-professed ‘right-wing Judy Garland’ – Ann Coulter.” “I can promise you, Homocon 2010 will be a hell of a lot more fun than chaining yourself to the White House fence,” concluded Barron.

General admission tickets are $250 to hear the woman who called a Democratic candidate for president a “faggot.”

On Islam: “We should invade their countries, kill their leaders and convert them to Christianity.”
On Judaism: “We just want Jews to be perfected. That’s what Christianity is.”
On education: “Illiterate students knifing one another between acts of sodomy in the stairwell is just one of the many eggs that had to be broken to make the left’s omelette of transferring power from states to the federal government.”
On terrorism: “My only regret with Timothy Mcveigh is he did not go to the New York Times building.
On feminism: “I think [women] should be armed but should not vote. Women have no capacity to understand how money is earned.”

Previous Great Things Come In Bears
Next Who At Target Donated To Yes On 8?