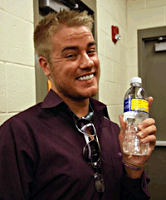 The Strange Case Of Matthew Vanderpool Yesterday Matthew Vanderpool, an openly gay candidate for the Kentucky state legislature, issued a press release declaring that he had rejected campaign donations from the Victory Fund because he didn’t want to be in their “back pocket.” Vanderpool said that while he is gay, he “has no gay agenda” and that being gay “does not define my entire life or the things I stand for.” He then gave InterstateQ this quote: “Excuse me for putting it this way, but if I prance around my district saying ‘gay this’ or ‘gay that,’ it will destroy me. The guy I’m running against is so conservative and anti-gay he will make it look like that is the only reason I’m running.”

I happened to be sitting next to the Victory Fund’s Denis Dison yesterday so I asked him about Vanderpool. Dison offers this response:

“This is a fairly clever stunt, but look closer and you realize how silly and disingenuous the whole thing is. The Victory Fund doesn’t offer its endorsement to anyone who doesn’t ask for it, and it was certainly never offered to Mr. Vanderpool. Our endorsement comes after a thorough examination of a candidate’s viability in a given race. Given the behavior it has exhibited so far, I think I understand why this campaign probably didn’t want to face the scrutiny. Ask any of our endorsed candidates who’ve won elective office whether they consider themselves in the “back pocket” of the Victory Fund. The truth is we do not lobby our own candidates or anyone else on any issue. Period. Mr. Vanderpool is getting some terrible campaign advice.”

More about Vanderpool and his apparently wacko campaign manager here.

Previous Sara Gilbert To Launch Chat Show
Next NOM: Those Evil Gays Came THIS CLOSE To Murdering Us In Rhode Island!