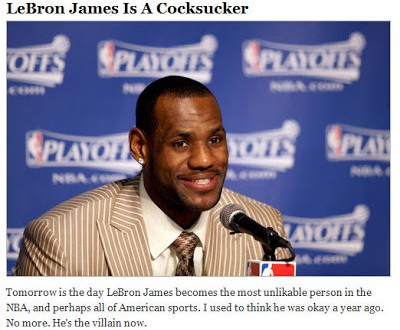 Today the above headline tops an article on Deadspin, the sports site owned by Gawker Media. According to author Drew Magary, NBA free agent LeBron James is a “goddamn cocksucker” for playing all the teams against each other in his bid to get the best deal. Homophobic language in sports is not surprising, but it IS a shocker coming from the otherwise gay-friendly Gawker empire, which employs many openly gay writers. Unbelievable.