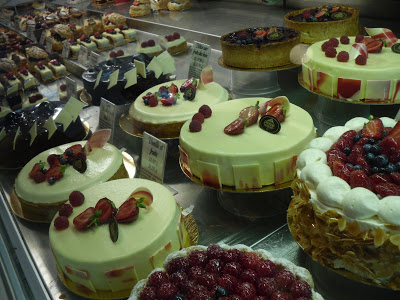 Yesterday my able homo-guide started our excursion at the famous St. Viateur Bagels in Montreal’s hipster-heavy Mile End, home to many of the city’s artists, musicians, and writers. Think Billyburg, but with slightly fewer sleeve tattoos. The bagels aren’t very New York-y, more like unsalted warm pretzels, therefore I liked them. After bagels, Daniel rented me an orange electric scooter and we were off to Marché Jean-Talon, a sprawling green market in Petite Italy, where I plotzed over the pastries and wondered WFT some of the veggies were supposed to be. Purple carrots! Lots of photos in the below slideshow for you foodies.

And then we were off to Mont Royal, the mountain in the dead center of town for which Montreal is named. My poor little scooter could barely get up the mountain, but eventually we got to the top where a local Portuguese band was shooting a music video. Daniel then toured me around the Parc du Mont-Royal, which was designed by Frederick Olmstead, who also created Central Park. The view of downtown and the Olympic Stadium are breathtaking from some points in the park.

After turning in the scooter, we scooted back down to the gay village for a posh dinner at O’Thym, where I had the best filet mignon I’ve had in many years. (Lots of great photos of our dishes below.) Joining us for dinner was a fun group of Montreal movers-and-shakers, including well-known Three Dollar Bill columnist Richard Burnett, “the Michael Musto of Montreal.” Love him. And then we were off to the Gotha Lounge for the JMG meetup, where about 20 very handsome and intelligent men turned up to hang out with us. Usually these things sort of put me on speed-dating mode in an attempt to properly meet everybody, but we ended up clubbing with lots of them and I got to chat extensively with almost everybody. More on the meetup and the rest of last night later, right now I’m late for poutine! Full-screen versions of the below slideshow are here.