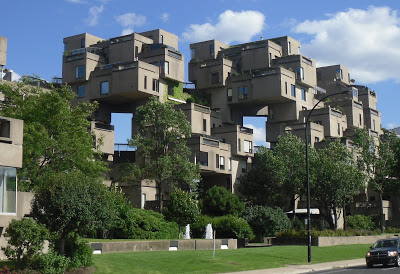 Yesterday my able homo-guide from Touisme Montreal and I picked up a couple of Bixi bikes and made an all-day excursion across the enormous Jacques Cartier Bridge over the St. Lawrence and down onto Île Sainte-Hélène in the middle of the river, where we toured Parc Jean-Drapeau.

There we circled the Biosphere from the 1967 World’s Fair and rode the actual raceway of the Canadian Grand Prix, past the Casino de Montreal and the Olympic Basin. Then we crossed back across the St. Lawrence, rolled past the way cool Habitat 67 (above) and down into Old Montreal, where we docked the Bixis and strolled around the cobbled streets in a sea of tourists, stopped for girly frozen drinks on the rooftop terrace of the fancy-schmancy Hotel Nelligan, and had a fab meal at Garde Manger.

After dinner we headed back to the gay village to drop at the Divers/Cite concert being held at the park directly adjacent to my hotel, where the capacity crowd was jumping to DJ sets in between live performances from local Montreal bands and singers. I was unfamiliar with the artists and didn’t understand a word, but it was all pretty great. And I got to run into my pal Suzanne Girard, the co-founder of Divers/Cite, whom I know from back when she ran Montreal Pride.

Then I had to run off to meet up with my beloved Farmboyz, who have driven up to revisit their former hometown. I was pretty beat from my 10-mile bike ride (those bridges!) but I managed to hang on for a few drinks at Le Stud (packed!) and the Aigle Noir (Black Eagle), from whose front deck we enjoyed the parade of hotties down St. Catherine. GREAT day! Lots more to come. Full-screen versions of the below slideshow are here.