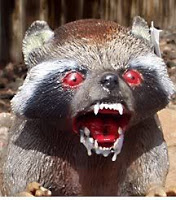 A woman was bitten by a presumably rabid raccoon in Central Park and today she tells New York Magazine her story.

I live on the Upper East Side. I was doing a little shopping on the Upper West Side and when I was done, decided to walk back through the park. But it was so gorgeous out, I stopped to enjoy it and read my book. So I’m sitting on a bench right on the 72nd Street Transverse, near the Mall and Bethesda Fountain. I was sitting there maybe 30 minutes … and suddenly I felt something around my feet, and a sharp pang in my left ankle. I think I felt the presence of something first, because I remember thinking maybe it was a leaf or something, but then I felt the bite. My first thought was: Someone’s dog. I looked down at my ankle and it was dripping blood.

When I got bit, it startled me, obviously, so I jumped — which caused two ladies walking by to turn and look. (I still wish I would have gotten their numbers or e-mails or something to thank them for their kindness. They were the ones that made me call 911; I was ready to slap a Band-Aid on it and be on my merry way.) One of them turned as they walked past and said, “Oh, it was a raccoon.” She paused for a second and then said, “It didn’t bite you, did it?” I stood up and showed them my ankle. Then I turned back to the bench, and sure enough there was the raccoon — sitting behind the bench near a bush.

She was treated with four rounds of rabies shots and is OK. But ZOMG I think she was sitting right where Dr. Jeff and I took a heat-stroke break on Monday. And then we walked home through the Ramble because our Seattle friend Jerry had never seen it. We barely escaped with our lives!