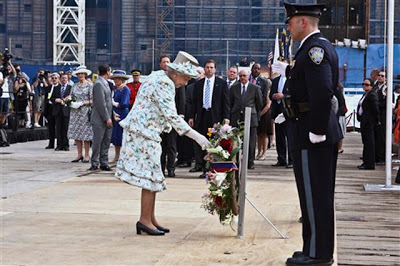 After her address at the United Nations General Assembly yesterday, Queen Elizabeth II endured the record-breaking heat to lay a wreath at Ground Zero. The New York Times gushes:

The small, white-haired monarch, wearing a flowered suit and white gloves, and with an elegant silk hat on her head, stepped out of her car just past 5:10 p.m., in the still-pulsating heat that had reached 103 degrees in Central Park, a whisper of wind riffling the air. Scores of camera-ready onlookers teetered on the perimeter of the rebuilding site, keen to catch sight of her. Not a bead of sweat on her face, Elizabeth inched her way past an honor guard, before being welcomed by Govs. David A. Paterson of New York and Christopher J. Christie of New Jersey and Mayor Michael R. Bloomberg. Sarah, one of Mr. Christie’s children, handed the queen a bouquet.

Mayor Bloomberg reminded the Queen that New York City is named after her “first cousin, ten times removed.” The Queen concluded her visit by cutting the ribbon at British Garden, a memorial to the 67 Brits killed on 9/11, the second-highest toll after Americans.

Previous RUSH LIMBAUGH: Obama Created The Recession As Payback For Racism
Next The Hunt For Lingle’s Lady Friends Is ON