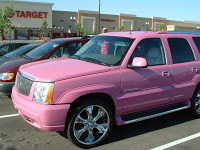 Pink Cars Get Stolen The Least According to a study of stolen cars, painting your ride pink is more effective than just about any theft-deterrent system.

“A study in the Netherlands illustrates car thieves’ preferences. From 2004-2008, the most commonly colored vehicle stolen was black. This may be because black vehicles look more luxurious. Following close behind black were gray/silver automobiles. Of the 109 pink cars in the study, not one was stolen. A bright and uncommon color, like pink, may be as effective deterrent as an expensive security system. Ben Vollaard, who conducted the research, wrote, ‘If the aversion to driving a car in an offbeat color is not too high – or if someone actually enjoys it – then buying deterrence through an uncommon car color may be at least as good a deal as buying deterrence through an expensive car security device.'”

“Honey, I just wonder what you doin’ in the back of your pink Cadillac.”