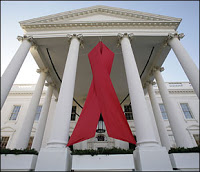 This afternoon President Obama unveiled a new strategy for fighting HIV/AIDS, saying that he hopes to cut the number of annual new infections 25% by 2015. The new plan includes a meager $30M in additional federal funding

In addition to slashing the infection rate, the strategy calls for increasing patients’ access to care so that 85 percent of those infected will receive care within three months of being diagnosed, compared with 65 percent who do so now. It says that 90 percent of all people who have HIV or AIDS should know they are infected, up from the current 79 percent. A further goal should be to reduce the HIV transmission rate by 30 percent. The report says the twin aims of cutting new infections and increasing the number of patients who receive care will advance Obama’s goal of making the United States “a place where new HIV infections are rare and when they do occur, every person, regardless of age, gender, race/ethnicity, sexual orientation, gender identity or socio-economic circumstance, will have unfettered access to high quality, life-extending care, free from stigma and discrimination.” The strategy does not call for a massive spending increase.

“President Obama has put forward a bold and historic framework for addressing HIV and AIDS in the United States. The Strategy importantly acknowledges the continued impact HIV/AIDS has on LGBT people, as well as the failure to put adequate attention and resources toward addressing the epidemic in our community. But the goals and timetables laid out in this document cannot and will not be achieved without strong leadership and robust resources,” said HRC President Joe Solmonese. “All of us – including the administration and Congress, state governments, service providers and advocates – must commit to ensuring that the bold vision of this plan is fulfilled, and ‘[t]he United States will become a place where new HIV infections are rare and when they do occur, every person, regardless of age, gender, race/ethnicity, sexual orientation, gender identity or socio-economic circumstance, will have unfettered access to high quality, life-extending care, free from stigma and discrimination.’”

This plan offers much-needed relief by focusing on high-risk communities, directing money to states with the highest need based on reported cases of HIV/AIDS, and by recognizing the unique needs of affected populations. The administration has taken a historic step today in the fight against HIV/AIDS. However, the plan doesn’t yet go far enough in ending new infections and helping those already coping with the disease to manage it. The government must make available the necessary resources and life-saving medicines for those in need. Adequate attention to and funding for implementation as well as aggressive timetables are essential to the success of this plan. This ongoing national tragedy requires an immediate, potent and cohesive federal response that is appropriately funded.

“The president’s plan is so flawed that it might actually represent a step backwards in combating HIV and AIDS in the United States,” said Housing Works President and CEO Charles King. “Since his days on the campaign trail, President Obama has repeatedly said that he wants to lead the fight against AIDS. Unless he commits significant new resources intended to make major inroads against the spread of HIV, he will be regarded as a leader who did next to nothing about the most devastating epidemic of our time.” The president’s plan sets insufficiently ambitious goals for reducing the number of annual HIV infections in the U.S. while, at the same time, the plan fails to provide adequate funding to reach even the modest HIV prevention and treatment goals that it sets out.

I don’t see anything in the plan about addressing the ADAP crisis. Note that even the Democratic lapdogs HRC are clapping half-heartedly.