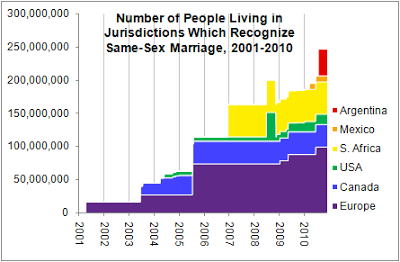 Nate notes this about his graph:

The big spike you see in 2008 is California recognizing gay marriage through the courts, and then un-recognizing it through the passage of Proposition 8. Right now, it’s possible to marry your same-sex partner in Buenos Aires, in Mexico City, in Ames, Iowa, and in Pretoria, South Africa, but not in San Francisco. With countries like Argentina and Portugal now recognizing same-sex marriages, however, the global trajectory has returned to its slow-but-steady upward pace.