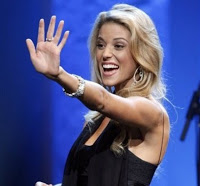 Miss Ladyfingers USA To Get Opposite Married In Gay-Boycotted Hotel Tomorrow Carrie Ladyfingers Prejean will opposite marry NFL quarterback Kyle Boller in San Diego. And in a deliberate final “fuck you” to the gays, she’s booked the wedding at Doug Manchester’s Grand Del Mar Hotel. Manchester’s hotels have been boycotted and picketed by gays and gay-friendly organizations ever since it was revealed that he contributed more than $125,000 to Protect Marriage. Manchester has tried to end the boycott, which has cost him millions in convention business, by offering free rooms and meeting space to LGBT groups, all of whom have refused. Last August, Doug “Sanctity of Marriage” Manchester ditched his wife of 43 years in an ugly divorce that included accusations that he forged her endorsement on an $8.2M tax refund check.