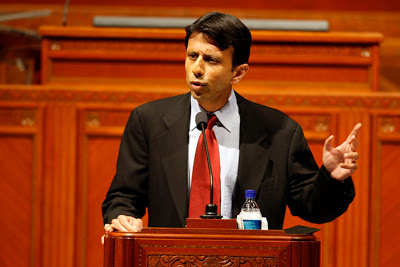 Louisiana Gov. Bobby Jindal has signed a bill allowing people to bring firearms into church. Just in case somebody wants to go crazy during Jeebus-time.

[The] bill would authorize persons who qualified to carry concealed weapons having passed the training and background checks to bring them to churches, mosques, synagogues or other houses of worship as part of a security force. The pastor or head of the religious institution must announce verbally or in weekly newsletters or bulletins that there will be individuals armed on the property as members of he security force. Those chosen have to undergo eight hours of tactical training each year. Burns’ original bill was killed by a Senate committee but he tacked its provisions onto a related bill that started out changing the period to have a concealed weapon permit from four years to five years at a cost of $25 a year. Burns contended that religious institutions in crime-ridden or “declining neighborhoods” need the added protection to ward off thieves and muggers.

Jindal also signed a bill requiring women to get an ultrasound before an abortion.