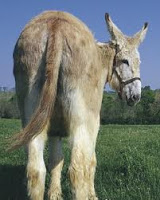 Angry over the planned gay pride parade in Jerusalem, the city’s ultra-Orthodox deputy mayor wants to parade 50 donkeys through the city on the same day.

“This expresses what we think — that this is a beastly act,” Rabbi Yitzhak Pindrus, who represents the ultra-Orthodox United Torah Judaism party on the city council, told the Ynet news website. His spokesman Menahem Zaide declined to link the donkey march to the parade, saying only: “Donkeys also have rights to be recognised as couples. We are in favour of donkey rights,” he told AFP. However, Zaide said they were still awaiting permission from the agriculture ministry. About 1,000 people were expected to take part in the pride parade under heavy security.

In 2007 marchers at Jerusalem Pride were pelted with eggs and human feces by ultra-Orthodox protesters.