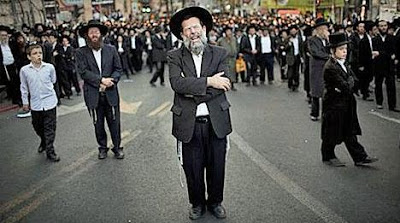 JERUSALEM: Ultra-Orthodox Protest But Pride Parade Goes On Without Injuries Yesterday’s gay pride parade in Jerusalem was met by three separate protests by the city’s Ultra-Orthodox Jews, but the event finished without significant incidents or injuries.

It was homosexual rights vs. religion on Thursday in Jerusalem as some 3,000 Israelis joined a gay pride parade, marching with colorful balloons and dancing in the streets. The march infuriated Orthodox Jews. But Yonatan Gher, one of the parade organizers, says there is no religious monopoly on the Holy City. “The reason the march takes place in Jerusalem is not to upset anyone,” said Gher. “We’re here because we’re Jerusalemites. This is our city as much as anybody else’s.” Ultra-Orthodox Jews held counter-demonstrations, carrying signs that read: “Sick perverts, get out of Jerusalem.” Many agree with this man who says that the Bible describes homosexuality as an “abomination.” “The promotion of a gay lifestyle in the streets of Jerusalem, which is the holiest city for the Jewish people, [and] for the other religions – for Muslims, for Christians – it’s a provocation” said one Orthodox Jewish man.

The planned donkey parade by Jerusalem’s deputy mayor was downgraded to a donkey puppet event, when he was denied permission to bring the animals through the city’s center.