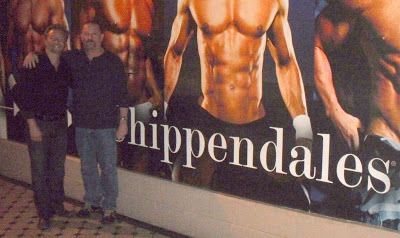 I Went To Chippendales! Several hours after I posted a Morning View shot of the Chippendales Theatre last Wednesday, I got a charmingly effusive email from their publicist, Randy Slovacek (above), who outed himself as a longtime JMG reader and invited me to the show. So Friday night, in the company of fellow activists Phil Attey, David Castillo, and Zack Ford, we were seated in the Olivia Newton-John booth (SRSLY!), enjoying free booze, and ogling a dozen or so redonkulously hot dancers.

Most of the 99% female audience appeared to be on bachelorette excursions and at times the screaming reminded one of a 747’s backwash. The show was slick and high-tech, with projected graphics, light effects, many set changes, and we were surprised that there was live singing and guitar playing. Randy told us that while none of the current cast members are gay, they’ve had gay dancers in the past and that the show is very welcoming of gay men. At one point, I thought poor Phil was going to have a coronary when the dancers were out working the audience and made a beeline over to our booth. But all we got was friendly bro-hugs. After the show, Randy presented us with gift bags containing a Chippendales calendar and a poster. Such a nice man. We had a blast. Previous Ted Haggard: I Have Over-Repented
Next Marriage Setback In New Jersey